When the Apple Watch was first introduced in 2014, I couldn’t help but feel overjoyed. I’ve always liked the idea of wearable tech after watching the show Continuum (If you haven’t seen it, bookmark this page, go watch all 3 seasons, and come back) where the main character, Kiera, has a body suite and head implant that give her almost superhuman abilities.

Of course I didn’t expect the Apple Watch to suddenly protect me from bullets and allow my eyes to scan the world around me like a thermal FLIR camera, but it was as close as I was going to get at this point in time.

At 6:32am – April 10th, the day the Apple Watch was available for preorder, I picked out my new Apple Watch Black 38mm Sports Edition for $350. At first that price seemed a little steep to me, since I haven’t worn a watch for almost 10 years because I could never get used to the feeling of having something with some weight on my wrist. But after considering the fact that I was thinking of spending close to $200 for a fitness band that did only just that – track fitness – I couldn’t see a reason not to spend a little more and get the same device plus an abundance of additional features. When I finished my preorder process, and got my order confirmation email, I couldn’t wait to be one of the first ones to get their hands on the new watch!

So April 24th, the Watch release date, came and went and still my “Order Processing” status remained. It wasn’t until May 12th that my order status changed from Processing to Pending to Shipped in about 3 hours and I had my new Apple Watch waiting for me on my front step the next day!

I have to say, I love Apple. Their packaging and presentation of all their products while you unbox them is so elegant and clean – I feel like I’m handling something meant for the space station!

The Watch is well-crafted, sturdy, and surprising comfortable and light (remember my issue with having things on my wrist?). I got the smaller 38mm screen, since I didn’t see a real benefit to having the 42mm, and the detail and clarity of the text, pictures, and icons is amazing. 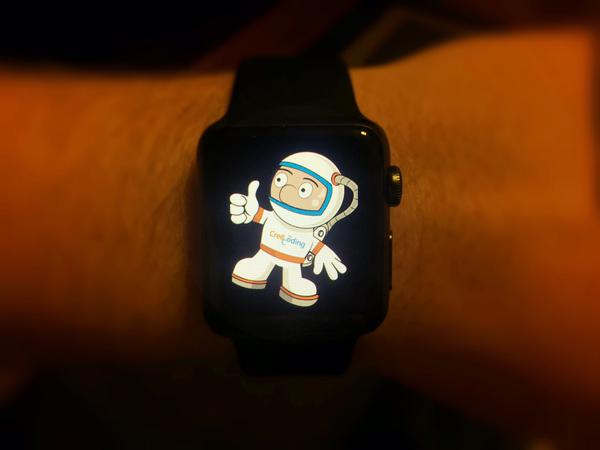 The app selection is not huge, but since I received my Watch, the Watch App Store list has at least more than doubled. I primarily use the built in fitness tracker to make sure I hit my stand, calories, and exercise goals each day which has made me realize that I need to move more!

The one thing though that I was not expecting is how natural it feels. Usually wearable tech has a stigma associated that it will be an additional distraction, waste more of your time, and be nothing more than a mirrored image of your phone in your pocket. But the Apple Watch has become more than that for me. I find myself no longer straying from conversations or losing focus on the world around me. The notifications on the Watch are so subtle and informative that it only take a slight glance to read and understand them. Instead of grabbing my phone out of my pocket, swiping my finger, entering my password, and opening my email to find out what that vibration was in my pocket, I can just look quickly down at my watch and get a preview of the email that just came in. The same goes for text messages, which I can now quickly respond, dictate, or ignore and come back to later all from a flick of the wrist!

The watch hasn’t hindered my life by giving me more to pay attention to, it has improved my life by giving me back the ability to pay attention to what really matter around me! It may sound sad, but that’s what today’s life is like for anyone that has a cell phone, a Twitter or Facebook account, or a camera to take selfies. The Apple Watch feels like the perfect companion for the heavy iPhone user and helps organize your distractions into a convenient and manageable way.

Now the Watch has been out for about 2 months now and I have to say, I have honestly not seen a single other person wearing an Apple Watch but me. At first I chalked it up to the preorder delays so it would make sense that not many people would have them, but after Apple announced that the Watch is finally available in stores, I figured that would of changed. But still I am the only one in my area.

So why is that? If I were to aggregate the various jokes and insults I have received from my friends, and credit them as true, it comes down to the following reasons:

Yeah $350 is a lot of money for a 1st generation product especially if you are not a first adopter like myself. But I have been hearing this excuse from athletes and bike riders which go out and spend close to the same amount on similar fitness trackers and bluetooth devices for their phones anyways – so why not get a better 2-n-1 product like the Watch?

and it’s from Apple

This is probably the main reason. There are so many people morally opposed to Apple products for no other reason other than it’s made from Apple.  Apple makes good products, whether you like to admit it or not, so when you are willing to accept that publicly – go out and get yourself an iPhone and a Watch.

With that in mind, I still have hopes that I will eventually no longer be the only one with an Apple Watch in my area.

Web Systems Architect for the Collaborative for Educational Services. I specialize in all things Web, Drupal, WordPress, and Web Systems Administration.

Welcome to the Technology in Education Blog

Join the conversation about technology, teaching and learning.