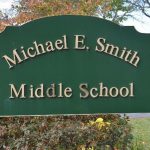 SOUTH HADLEY — Longtime Mosier Elementary School assistant principal David Gallagher has been named principal of Michael E. Smith Middle School. Gallagher has been with South Hadley public schools since 1996, where he began his career in the district as a school counselor at Mosier Elementary School. He assumed an assistant principal role at the elementary school around the year 2000,… [Read More]