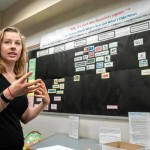 AMHERST — The pope endorsed Donald Trump, who himself is facing sealed indictments and possibly the death penalty for espionage. Barack Obama wasn’t born in the United States and some members of his Democratic Party are engaged in a human trafficking ring run out of the basement of a Washington D.C., pizza parlor. So-called “fake… [Read More]