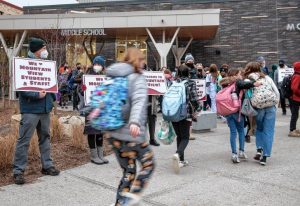 EASTHAMPTON — The morning announcement may have indicated that it was school day 75, but when middle school students returned from their holiday break on Wednesday morning, many admitted that it felt more like the first day of school. And students weren’t alone in that feeling.

“It’s going to feel like the first day of school all over again, so no worries. I feel the same way,” sixth grade teacher Donna Barcomb said as she ushered her students into the brand new Mountain View School building.

Fifth through eighth grade students were welcomed into the 176,155-square-foot building past a line of their teachers, administrators and members of the PTO as well as several of the city’s first responders. As the 425 masked middle schoolers entered Mountain View’s entryway, they could be seen cheering as they spotted their friends and their homeroom teachers, who held up name placards above the crowd. Each homeroom teacher then ushered their class down the hallways to the new classrooms. Along the way, students looked left and right, taking in each detail — from the paint color choice to the water bubblers.

When Barcomb’s homeroom students sat at their new desks, which are now equipped with hooks on either side to accommodate backpacks, she encouraged her class to talk about the new building, the location of their classes, and how it would affect their new schedules. Wiggling back and forth at his new desk chair, sixth grader Landon Dickinson remarked at how comfortable his seat was.

Barcomb also highlighted the functional  thermostat in the classroom.

“You won’t have to worry about being cold. This is a climate-controlled classroom. I have a thermostat right here. Isn’t it lovely? We won’t be cold or extra hot,” she said.

A number of students were all focused on something they’d never experienced before: lockers.

“When I was in fourth grade, I was super excited to have lockers in fifth grade, I don’t know why, but we didn’t get that,” said sixth grader Hayden Donovan. “So, I’m pretty excited.”