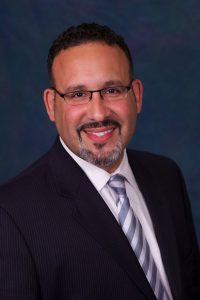 Miguel Cardona remembers how overwhelmed he felt when he walked into school for the first time as a student.

The son of parents who moved to Meriden, Conn., from Puerto Rico as children, he lived in public housing and didn’t speak English as a young child.

“I remember my first day of kindergarten at John Barry School,” the nominee for U.S. secretary of education said at a virtual farewell celebration with Meriden leaders earlier this month, referring to an elementary school in his home city.“That day, I ended up in the nurse’s office crying, and I had to go home early. I never wanted to go back. Here I am, 40 years later, and I’m having mixed emotions about leaving the place I love.”

Last month, President-elect Joe Biden announced Cardona, now Connecticut’s education commissioner, as his pick to be the nation’s top education official. Less than two years ago, Cardona was an assistant superintendent in his hometown’s 8,000-student district. If confirmed by the Senate, he could be a cabinet member within weeks.

It’s a rapid ascent for a man who is known more by his long-time colleagues for solving problems than for standing on soapboxes.

Cardona, 45, is preparing to step into the role after the hot seat has been warmed to white-hot temperatures by former U.S. Secretary of Education Betsy DeVos, who left office Jan. 8 as the most high-profile and divisive education secretary in history. Making things more intense: a presidential transition marred by national turmoil, a deeply divided nation, and an ongoing public health crisis that puts schools front and center.

In selecting Cardona—a former teacher, principal, and district administrator—Biden fulfilled his campaign pledge to appoint a public school educator to the role. His choice was met with enthusiasm from education groups across the ideological spectrum.

But Cardona’s approach to the COVID-19 pandemic and how it should affect official judgments of schools’ performance could quickly erase that friendly reception.

Cardona’s peers paint him as a leader who seeks out every chance to collaborate and to find solutions by looking at the bigger picture. In conversations with those who know him, he comes across as someone who wants consensus, not confrontation. But one person who’s watched his career up close expressed concerns that such an attitude, along with his relatively short tenure leading a state education department, could make him susceptible to pressure in Washington.

His experience as a child who learned English at school and code-switched between the culture of his Puerto Rican community and that of his white peers has helped him build bridges and value relationships in his work, his colleagues also said.

“He’s able to lead with an equity agenda without alienating the people who don’t understand it quite yet,” said Robert Villanova, a former superintendent and education professor at the University of Connecticut, who worked with Cardona when the nominee was still a graduate student. “Some people may be wondering ‘Why him?’ And I think that’s legitimate because he’s an early-career leader. … But he has all of the right inclinations.”

The Biden transition team did not respond to a request to interview Cardona for this article.

Connecticut Gov. Ned Lamont, a Democrat, appointed Cardona to serve as his state’s education leader in August 2019, a tenure that has been dominated by the state’s response to the coronavirus pandemic.

He has spent his life and most of his career in Meriden, a city of about 60,000 people midway between New Haven and Hartford. Cardona and his wife, Marissa, a middle school family liaison, have two children who are students in Meriden schools.

His father, Hector Cardona Sr., was a police officer for many years and famous for his distinctive handlebar mustache and for building relationships between law enforcement and Meriden’s Puerto Rican community.

Cardona Sr., who is honored in the Meriden Hall of Fame, often played traditional Puerto Rican music in a band with his son Hector Cardona Jr., a fellow police officer. Miguel Cardona sometimes accompanied his family on the bongo drums at events like the city’s Puerto Rican festival, where his father served as chairman.

Today, his wife and children also perform music together.

“I joke with Miguel: Your kids, your wife, they have the real music talent. They let you join their band once in a while,” said Mark Benigni, the superintendent of Meriden schools who was Cardona’s colleague for many years.

Overcoming his early anxieties and the awareness that he was different from many of his peers, Cardona eventually became a first-generation college graduate and developed the confidence and people skills that helped him feel comfortable in places “from the barrio to the boardroom,” he told his Meriden colleagues at the farewell celebration.

After completing his bachelor’s degree at Central Connecticut State University in 1997, Cardona took a job teaching 4th grade in Meriden, where it’s not uncommon for alumni to return as teachers. After five years in the classroom, he became the state’s youngest principal, leading Hanover Elementary School at age 28.

In 2001, Cardona told the Associated Press his office shelves were lined with books about different cultures, including one: Growing Up Bilingual.

As a principal, he oversaw a bilingual education program in his school. When he earned his doctorate from the University of Connecticutin 2012, his research focused on addressing “achievement disparities” between English-language learners and their peers.

His dissertation defense was so powerful that it brought some people to tears.

“He gave a very scholarly presentation but at the end, he talked about his own family and his upbringing in Meriden. He just wanted people to understand how [concerns about English-language learners] became a part of who he was,” said Villanova, the professor.

Current Hanover Principal Jennifer Kelley remembers when Cardona hired her as an instructional assistant, a job that essentially made her an assistant principal, in 2012. She had been a teacher for 15 years before that.

Cardona was skilled at creating an inclusive culture, and he helped her sharpen her problem-solving skills by considering the bigger picture, she said.

In her first year, Meriden expanded from half-day to full-day kindergarten, and Hanover took kindergarten students from other schools as part of the shift. It created an unusual situation: There were about 200 5- and 6-year-olds in the building, compared to about 400 students in the older grades.

Kelley recalls being overwhelmed at lunch one day, trying to supervise a whole cafeteria of the school’s youngest students, who were just adjusting to being there. Seeing her frustration, Cardona helped her rearrange the schedule of teacher’s aides to bring in more support.

Meanwhile, Benigni, the Meriden superintendent, recalled being impressed with how Cardona responded calmly but thoroughly to a disconcerting incident in which a student brought bags of marijuana to school in his jacket: “That day was when I said, ‘You know what, I have someone here who’s going to be steady under pressure, and someone who’s going to give clear information to the staff and to the community.’”

But Cardona also excelled at the light-hearted parts of the job. He charmed the young students by dressing as a train conductor on “Polar Express Day” when they all wore pajamas to school.

Along the way, Kelley felt like Cardona was giving her tools to grow in her position.

“He told me I would work harder than any other [instructional assistant] because we are preparing you for the next step,” she said. “You have me as a safety net, but you are going to really learn.”

Paul Freeman, the superintendent in Guilford, Conn., remembers observing Hanover as part of a superintendents’ leadership group when Cardona was principal there. Good principals lead their schools’ logistical and instructional efforts, and they also play a huge role in shaping the climate, Freeman said.

“It was clear that he could be skillful in all of those areas,” he said. “He is passionate and caring, and people know that about him. And he’s good at the details.”

Cardona was tapped to lead several statewide education efforts, including a 2011 task force charged with making recommendations for closing the academic achievement gap between student groups.

The committee was “a broad group of powerful people,” including legislators, university deans, and district administrators, said Freeman, who was a member. It took on some politically tricky topics, making recommendations in a 2014 report that touched on housing policy, hunger, and social services as part of the systemic conditions that stifled some students’ achievement.

Jason Rojas, a state legislator who served on the committee, said he and Cardona had similar childhoods, which gave them personal insights into some of the issues they discussed.

“I remember him being so sincere about the pain he was going through in seeing what was happening in our communities,” Rojas said.

Seven years and several transitions in state leadership after it released its final report, many of the task force’s recommendations have not been put into action. In October, Cardona emailed the group about “putting the band back together,” attaching a new study on housing policy and educational outcomes.

After serving on two state task forces with Cardona, one about teacher evaluations and another on what testing requirements there should be for students, Joe Cirasuolo came away impressed by Cardona’ knowledge and ability to explain “complex truths.”

“I came to respect him. His integrity is beyond question,” said Cirasuolo, a district superintendent for 23 years who used to lead Connecticut’s superintendents association and is now retired.

Cardona’s experience navigating state-level politics as commissioner might be limited, but that doesn’t mean he’s avoided dealing with common snares in school leadership.

Erin Benham, now a member of the state board of education, first encountered Cardona when she was the leader of the Meriden teachers’ union and visited his school to discuss potential layoffs as a result of budget cuts. Rather than talking about overall positions, Cardona talked about individual teachers, lamenting that any of them may lose their jobs.

“He said ‘Is there anything I can do to keep this person?’” Benham recalled. “He felt as glum about it as we did. You don’t always see that.”