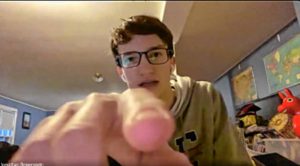 NORTHFIELD — Instead of taking to the stage, Pioneer Valley Regional School students will take to the screen for Thursday’s online premiere of “Infinite Sound and Furious Jest,” an original school production.

“Infinite Sound and Furious Jest” can be viewed on Facebook at fb.me/e/1VNJJliUQ at 8 p.m. The play will be live streamed via the Bernardston Northfield Community Television Facebook page, facebook.com/bnctelevision as well as be available on Comcast Channel 17 in Northfield, Bernardston, Leyden and Warwick.

The event will even be a bit of a surprise for the students involved because English teacher and Theater Director Brian Campbell, who wrote the script and directed the production, is the only one who has seen the final cut.

“What is really interesting is that the actors don’t even really know how it will look,” Campbell said. “I recorded all of their lines separately and with multiple styles of takes, so it will be the first time for them seeing it all together.”

Students Amelia Fowler-Shaw and Jacobia Tyminski explained that the play is about a group of students putting together a play via Zoom. Jacobia’s character, Shannon, is leading the charge to put this play together, but is met with misunderstandings, big personalities and other hijinks along the way.

Campbell said the script idea surfaced by thinking about all of the minor things that can go wrong throughout any production, and exaggerating them to have them all happen at once.

“While certainly over-the-top for the sake of comedy, I think anyone with experience in theater can relate on some level to the quirks and individual difficulties of dealing with a difficult cast, unreliable crew and uninformed producers,” Campbell said.

Students have been rehearsing and performing their roles from home and recording them via Google Meet for the last few weeks. Seventh-grader Anthony McNamara and sophomore Jonathan Bodenstein said they both had to adjust to acting without sharing a space with others.

“It’s a huge difference,” said Anthony, who plays a principal who just can’t quite get in sync with what’s trendy among the students. “It’s also harder, because it’s just fun to get to see your friends. But it’s definitely been fun seeing everybody else adjust to it along with me.”

Jonathan said rehearsals saw students all on video chat, and often focused on one character’s lines at a time. He said the practice of recording multiple takes for the same line felt more like working on a movie production than a play.

“When you’re just doing a play you’re just going out there, and what you say to the entire audience is what they’re going to hear,” he said. “But with this, Mr. Campbell sort of guides us in different directions with the different ways he wants you to say it so it will fit together and make a good product.”

While it’s a new form of acting to get used to, Jonathan and eighth-grader Maeve Byrnes said they’re happy to be a part of theater in any form, as the lasting COVID-19 pandemic has impacted the performance industry.