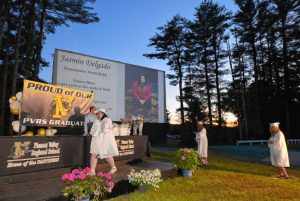 NORTHFIELD — The 40 members of Pioneer Valley Regional School’s Class of 2020 were the stars of the show at the Northfield Drive-In Monday night, during a unique yet fairly traditional graduation ceremony where speakers encouraged graduates to stay true to their values, and use their knowledge to create change in the world.

Escorted by the Northfield Police Department, a student caravan began at Pioneer and traveled along Route 63, where the Northfield Fire Department flew a large American flag from its ladder truck. Scattered all the way to the New Hampshire state line, proud neighbors and family members held signs of congratulations as they cheered for the graduates who passed by on their way to the drive-in.

“You guys have reached this incredible threshold in your life,” Pioneer social studies teacher and alumnus Matthew Killeen told the graduates. “Before this, you were high school students, and in a few minutes you’re going to be whatever you want.”

While graduation is a celebration, Killeen said it is OK to mourn the lack of traditional closure that comes with a senior spring. He said students have had to grow up quickly as they live through changes in the school district, a public health crisis and active protests against racial inequality and police brutality.

Our times demand much from you, but you are ready,” Killeen said.

Potee said she never thought the year would end with her “gazing out onto a field of headlights” instead of speaking to smiling faces. Despite the impact it had on their senior year, Potee said she and her fellow graduates would not be defined as the Class of COVID-19.

“We are the class of rowdy sports games, loud pep-rallies, sweaty marching band parades and karaoke in AP calculus,” Potee said. “We are a class of musicians, of athletes, dancers, gym rats, activists, video gamers, scholars, artists and friends.”