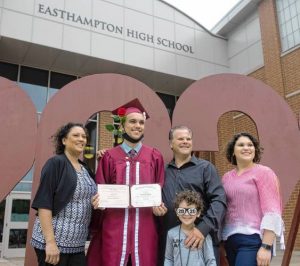 EASTHAMPTON — Friday marked the completion of a graduation ceremony the likes of which Easthampton High School has never seen before.

Over the course of five days, students of the Class of 2020 took their turns walking across an outdoor stage in front of the High School, a giant 2020 sign in the background. They did so one at a time, each student being allotted a 10-minute window.

“I’m pleased with the way this has gone,” said EHS Principal Bill Evans. “I think the families feel like they get to see the goods, so to speak.”

Of the 117 graduates in this year’s class, almost all chose to participate in the ceremony.

The socially distant, one-at-a-time commencement ceremony was designed to maintain safety amid the COVID-19 pandemic, which ended in-person classes at EHS in March.

The ceremony was certainly not what any of the graduates pictured for their graduation at the beginning of the school year. Still, the diplomas they received at the end of their walks were no less real, nor were the cheers of family members and the pictures they took after.

All of the walks are going to be included in a video that’s being created by Easthampton Media, which will also include videos from those who would have spoken at graduation under normal circumstances.

Graduate Cameron Searle said he hadn’t expected to have an in-person graduation, saying he thought it might have been online or pushed back until later.

“They managed to pull it off,” he said. “I thought it was pretty cool.”