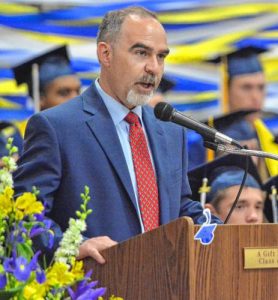 MONTAGUE — Brian Beck, principal of Hopkins Academy in Hadley, has been chosen to replace Michael Sullivan as superintendent of the Gill-Montague Regional School District.

Beck is a Montague resident. Before starting work at Hopkins Academy, he had been principal of Athol High School; before that, he worked at Mohawk Trail Regional School, as assistant principal and as principal.

“I feel like I’m ready for the superintendency,” Beck said. “I feel like I now have the skills to be of service to the school district.”

Beck was one of three candidates interviewed by the Gill-Montague Regional School District School Committee Monday night in a video conference meeting. The committee also interviewed Karen Ferrandino, who is the director of student services at Frontier Regional and Union 38 school districts; and Mary Jane Rickson, the interim superintendent of Maynard Public Schools. Each interview lasted about an hour.