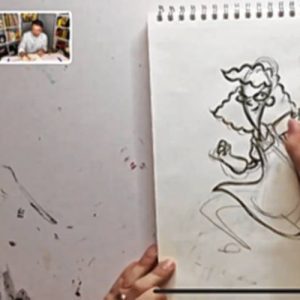 Monday marked the first day of working remotely for scores of Americans following social distancing guidelines, including many parents and guardians who suddenly found themselves homeschooling their kids. Of course, not everyone has the privilege of working from home — only 29%, according to the U.S. Bureau of Labor Statistics — but for those who do, and for those trying to balance a full-time job with full-time child care, yesterday was an unprecedented and eye-opening social experiment.

While my husband went to a critical work meeting yesterday, I was at home trying to create some simulacrum of first period for my son, who’s in the second grade. Without schoolwork (we pick up packets today), we went freestyle. My son spent the hour writing a Lonely Planet-style travel guide to a country he invented called Hoilemandeii, which is an island located between Japan and Australia, and where the most popular restaurant is named Miyagi’s Japanese Food and the national sport is catching flies with chopsticks (yes, he recently watched “The Karate Kid”).

All the while, as my phone rang and pinged with texts from reporters and editors, my 4-year-old daughter needed help building a fairy habitat, putting on a ragged, hand-me-down Elsa gown and painting her toenails pink. It was only an hour, and it was largely well-spent, but wow — time really bends.

Fortunately, there are people in our own community who are helping caregivers fill and structure the days ahead with everything from online drawing lessons to resource guides overflowing with ideas on how to engage creative, curious minds.

This morning, my son and I watched the first episode of “Draw Every Day with JJK,” a webcast launched Monday by Florence resident Jarrett J. Krosoczka, also known as JJK, the National Book Award finalist and author and illustrator best known for his graphic memoir, “Hey, Kiddo” (which won Book of the Year at the Harvey Awards), and his “Lunch Lady” and “Jedi Academy” book series. The webcast will air every weekday 2 p.m. Eastern Standard Time at youtube.com/studiojjk.

Another Northampton resident, Kennedy Center Education Artistin- Residence Mo Willems, also launched a new webcast Monday called “LUNCH DOODLES with Mo Willems!” from his home studio. “I wasn’t planning on being here, and you probably weren’t planning on being here, either, but now that we’re here, let’s hang out together for a little while, let’s create some things, let’s doodle,” Willems begins. “Let’s find a way to be isolated and together at the same time.