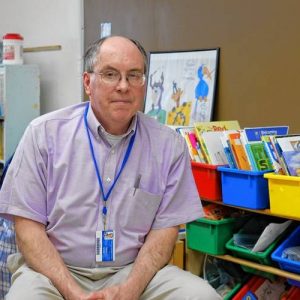 TURNERS FALLS — It can take a village to raise a child. But just as often, it takes a whole school.

Kevin White, the counselor at Sheffield Elementary School, knows this as well as anyone. He’s been a school counselor with the Gill-Montague Regional School District since 1990, and has been a social worker in Franklin County since 1982.

This year, he is Gill-Montague’s recipient of the Excellence in Teaching Award, a yearly award sponsored by the Harold Grinspoon Foundation, in which the winner is nominated by colleagues. Gill-Montague is one of 45 school districts in the Pioneer Valley that participate, with each district naming a recipient.

Having lived in Franklin County since he was a teenager, and having worked as a youth counselor for nearly four decades, White has seen the social changes — how poverty can erode families and neighborhoods; how each new wave of addictive drugs disrupts the social fabric the same way every time; how the rise of electronic entertainment has altered children’s social awareness. He admitted it can be a lot to deal with.