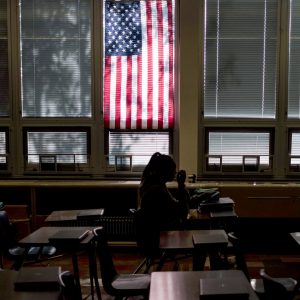 WASHINGTON — Facing a bipartisan backlash led by Republican lawmakers, the Trump administration is backing off a bookkeeping change that would have drastically cut federal funds for rural schools – at least for a year.

Betsy DeVos, the education secretary, will allow states to more easily qualify for funding under the Rural and Low-Income School Program, after hundreds of districts faced cuts when the department abruptly began using eligibility requirements it had not enforced in 17 years.

During a program review, the department discovered that schools had been receiving funding based on the number of students who qualify for free or reduced-price meals rather than poverty data from the census, as is required by law.

But Ms. DeVos determined that she had the authority to allow the use of alternative data for an additional year, said Angela Morabito, a department spokeswoman. The department has also proposed language for Congress to permanently change the data source in the law. “We hope they act quickly,” Ms. Morabito said.

The new requirements would have kicked an estimated 800 schools out of the program next school year, and superintendents were bracing for budget cuts of $30,000 to $100,000.

“We have heard from states the adjustment time is simply too short, and the secretary has always sought to provide needed flexibility to states during transitions,” Ms. Morabito said. “This protects states and their students from financial harm for which they had not planned.”

The department’s decision to reverse course, first reported by Bloomberg Government, came hours after 21 senators — 13 of them Republicans, including Mitch McConnell of Kentucky, the majority leader — signed a bipartisan letter urging Ms. DeVos to abandon the new methodology. The senators said the decision was abrupt and would “force many rural school districts to forgo essential activities and services.”

For weeks, Senator Susan Collins, Republican of Maine, had been raising alarms that more than 100 schools in her state would lose $1.2 million under the change.

“The Department of Education made the right decision,” Ms. Collins said in a joint statement with Senator Maggie Hassan, Democrat of New Hampshire. “We are pleased that the department listened to the bipartisan opposition to this misguided change.”

The move was also praised by the AASA, the School Superintendents Association, which protested the cut. “It was wise of Secretary DeVos to change her mind and reinstate funding that poor, rural districts will need and are relying upon this year,” said Sasha Pudelski, the organization’s advocacy director.