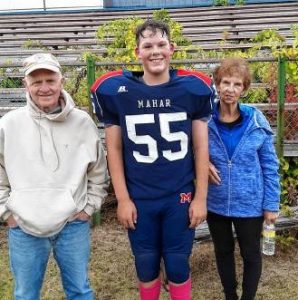 At 18 years old, Martin Luther King Jr. wrote, “Intelligence plus character — that is the true goal of education,” in an essay for his Morehouse College newspaper.

That sentiment will ring true this weekend when students from across the state meet in Boston to reflect on King’s legacy, as well as continue their own journey of community service.

There are 23 eighth-graders from Franklin County and the North Quabbin region who were selected as Project 351 ambassadors this year. Saturday, they will travel to meet with Gov. Charlie Baker, share ideas and then go to different community service sites across the city.

Project 351 was started 10 years ago by former Gov. Deval Patrick as a way to recognize the leadership and community service of eighth-graders from all 351 municipalities in Massachusetts, as well as celebrate statewide unity and the work of Martin Luther King Jr.

This specific Saturday is chosen for the Project 351 meeting with King’s legacy of community service in mind, as it is two days before Martin Luther King Jr. Day. Students are prompted ahead of the meeting to think of a pressing societal issue to share.

Cheri Hoyle, a guidance counselor at the Ralph C. Mahar Regional School in Orange, has been involved with selecting Project 351 ambassadors from each of Mahar’s constituent towns — New Salem, Orange, Petersham and Wendell — for the last nine years.

She said teachers and guidance counselors come up with a list of potential ambassadors in the fall, specifically recognizing students who are ethical, involved in community service, role models and leaders among their peers. The list is narrowed by December and one student from each town is selected as an ambassador.

“It’s specifically to recognize eighth-graders who continue to commit to either charity work, or volunteering at a soup kitchen, helping teachers after school, helping others — basically serving the greater good,” Hoyle said.

Christine Bailey, whose son, Noah Bailey, was chosen as the Orange ambassador, said her son plans to talk about environmental issues. Bailey said the significance of her son being selected is just starting to sink in.

“The kids say, ‘Oh, yeah, that’s great,’ but might not understand the significance of it. But it’s a big deal when they get there,” she said. “He (Noah) wants to talk to the governor about climate change, about the pollution and trash in the ocean.”

Students have also been preparing items to donate to the Be Like Brit Foundation, which runs an orphanage in Haiti. Britney Gengel, the foundation’s namesake, was a 19-year-old from Rutland who traveled with students and faculty from Lynn University to Haiti to feed the poor and visit orphanages in 2010. She sent a text to her mother expressing the desire to start her own orphanage in Haiti three hours before being killed when the hotel she was in collapsed during a 7.0 magnitude earthquake. Gengel’s mother will be at the meeting Saturday to accept donated items like shampoo and clothing to bring to the Be Like Brit Foundation orphanage.