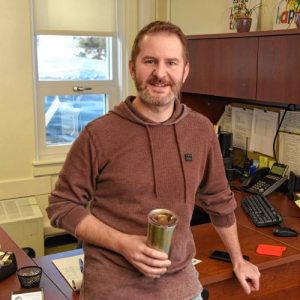 GREENFIELD — Jake Toomey has worked in every grade level of education from preschool to 12th grade. So it seems fitting to him to add higher education to his resumé.

The 41-year-old said he will step down as principal of the Discovery School at Four Corners on Friday to take over as the director of human resources at Hampshire College, a position he begins three days later.

“It’s really hard to leave this school. I’ve been a member of this school community for over 10 years now. My kids went here, so I’ve been a parent here, I was a teacher here for a year and then became the principal, so I feel like in the past 10 years I’ve kind of worn every hat in the school,” he said sitting in his office Friday. “I’ve been coming to this building for 10 years in one way or the other, so it was a hard decision to leave. It’s a great group here. It’s a great school. I couldn’t have done the things I’ve done here without such support from the staff as well as the families here.”

Superintendent Jordana Harper said Nancy Putnam, a longtime Greenfield principal and the district’s most senior elementary principal, has agreed to fill in for Toomey until a permanent replacement is selected.

Toomey, an Army National Guard veteran who spent a year in Iraq in 2005, said he has been with the Greenfield School Department for about 5½ years and has worked as principal for about 3½ years. The Berkshire County native was hired for the principal role in 2016 to replace Suzanne Sullivan, who left at the end of that academic year to take a job in her hometown of Billerica to be closer to family.