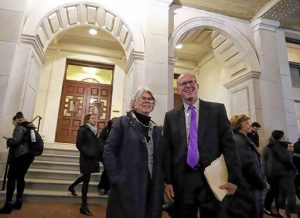 And western Massachusetts lawmakers have their fingerprints all over the legislation.

The landmark compromise legislation is a significant overhaul of the state’s Chapter 70 education funding formula. It was largely based on the PROMISE Act, which was introduced in part by state Rep. Aaron Vega, D-Holyoke. And several local lawmakers were successful in getting amendments adopted as part of the larger bill.

Domb herself sponsored a successful amendment that ensures that charter schools are submitting the same annual reports and accountability plans that traditional public school districts are required to submit under the new legislation.

State Rep. Natalie Blais, D-Sunderland, sponsored an amendment in the House that will create a special commission to study and make recommendations on the fiscal health of rural school districts that are facing, or might face, declining enrollment.

Blais said the rural schools commission was included in the initial bill, but the amendment — which on the Senate side was sponsored by Sens. Adam Hinds, D-Pittsfield, Jo Comerford, D-Northampton, and Donald Humason, R-Westfield — strengthens the commission.

She noted that the commission will now include a member from the Rural Policy Advisory Commission, and that it now emphasizes that the state study all districts that are facing declining enrollment.