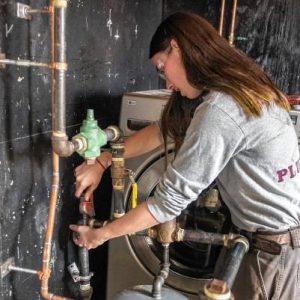 Carlos Rivera knew several years ago as a middle school student that he wanted to attend Smith Vocational and Agricultural High School.

At the time, Rivera said he didn’t like the school work while at JFK Middle School, and was looking for a hands-on education that he knew he could get at the vocational in the same city. Now 17, the Smith Voc senior said his grades have improved and he’s in advanced placement classes and National Honor Society.

Though he is content, he says there are stereotypes about Smith Voc, where students spend time on traditional academics and their chosen trade.

“Everyone thinks you’re learning a trade because you’re stupid,” said Rivera, while sitting in Smith Voc’s front office with safety glasses on his head. “I think that it’s ignorant … We have an opportunity no one else has.”

Rivera has already mapped out how he will use his opportunity. After graduation, he plans to move to North Carolina and work for his uncle’s plumbing company while also enrolling in college to study business.

Rivera is part of a growing number of vocational high school students in the commonwealth. The 145-student freshman class at Smith Voc, for example, is bigger than any other incoming class that Superintendent Andrew Linkenhoker can remember. For the first time, he said, the school had to turn some students away because it was too full.