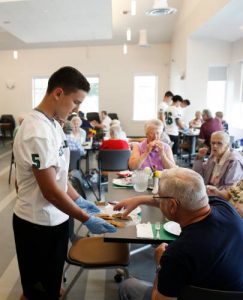 The Greenfield High School football team continued its now annual tradition of giving back to the community Tuesday, serving hamburgers and hot dogs to 50 members of the community at the John Zon Community Center.

The event was organized by assistant coach Glenn Wilson, who works for the Greenfield Department of Public Works. One of his jobs includes working at the community center. He brought the idea to have players serve food four years ago to head coach Mike Kuchieski, and the team has done it ever since.

“These people have done a lot for us,” Kuchieski said. “We’re going to try to do something for them right before the season. It gets us all together and gives us a little camaraderie before we start (practice) Friday. We want the players to be great community citizens.”

Wilson has made sure every team he has been a part of has done something to give back to the people of the community.

He feels student-athletes should always find a way to get involved in the towns they live in.

“It builds character,” Wilson said. “They enjoy being here. They really do. It was not difficult to get volunteers. When I asked if people could help out, everyone said ‘Yes, I would love to.’ We have a great group of kids. This thing got signed up in a hurry. It’s great on both sides between the seniors and the student- athletes. It’s a win-win for everybody. You can not do enough for giving back to the community.”