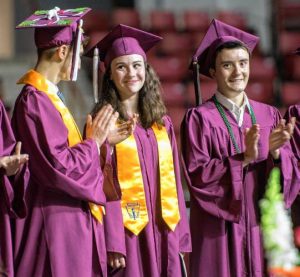 AMHERST — Bob Keiter vividly remembers taking his granddaughter, Malina Kern, to Rhode Island’s Block Island when she was little. He said that he used to take Malina out into the water and the two would watch as the waves came crashing in — some big and some small.

“I’d say, ‘Over or under, and she’d have to decide,’” Keiter said, recallinghow his granddaughter succeeded in dealing with the challenge each approaching wave presented.

Keiter was walking into the Mullins Center at the University of Massachusetts Amherst on Friday to watch his granddaughter celebrate another success: graduating high school. And for Keiter, there was no question what direction his granddaughter was headed that day.

“Over for sure,” he said with a laugh.

Kern was one of the 209 students from the Class of 2019 to graduate Friday from Amherst Regional High School. Interim Principal Miki Gromacki described the class as one full of students willing to make their voices heard on issues ranging from climate change to the school’s dress code. Talib Sadiq, the school’s assistant principal, spoke about that same quality, saying that the class was now going into the world as thoughtful, passionate young adults.

“Please change the world!” he said to laughter.