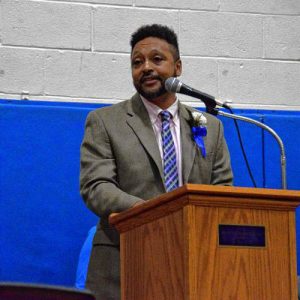 BUCKLAND — The graduating class of 63 students filed into the gym to “Pomp and Circumstance” at Mohawk Trail Regional School’s commencement Sunday.

Co-Principal Lynn Dole initiated the ceremony, and Salutatorian Jackson Hicks gave a speech focusing on learning to appreciate the present moment, with its apparent imperfections, despite the hopes and expectations for the future.

“With the end of high school comes something new and exciting,” Hicks said. “But if you look too far in front of you, you’ll lose sight of where you are.”

“Maybe you do not want to be in these seats today, in front of hundreds of people. But shouldn’t you appreciate that you’ve finished high school? Hicks said.

The commencement speaker was Anthony Kwame Harrison, a 1988 graduate from Mohawk Trail, now a professor in the sociology department of Virginia Tech.

Harrison was born in Ghana, and was brought to western Franklin County just before his first birthday, he said. Despite the differences from Ghana, his mother decided to stay, “because she said it looked like a good place to raise kids. In fact, it was a great place to raise kids,” he said.

Harrison spoke about how the experiences and connections he made at Mohawk Trail influenced his life into his adulthood. As a student at UMass Amherst, he at first felt divided between his friends from Mohawk Trail, mostly white, and new friends, mostly black — then realized that he didn’t have to divide them.

When Harrison moved to San Francisco in 2000, he stayed with a friend from Mohawk Trail until he could find a place to live. He found work at a record store. One day a group came in and he instantly recognized them as Mohawk Trail graduates.