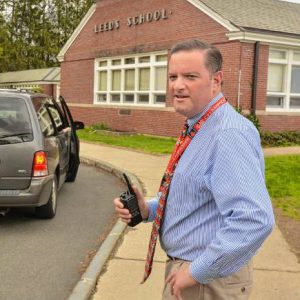 NORTHAMPTON — This school year will be Sal Canata’s last as principal of Leeds Elementary School. He announced Tuesday that he is leaving to be principal of Holyoke STEM Academy, a public middle school, starting July 1.

“I weighed the decision. I wavered quite a bit,” Canata told the Gazette. “I came to the conclusion this was the right decision for me at this point in my life.”

Staff members were told Monday, and a letter was sent home to parents on Tuesday, Canata said. He has been working in education for over 25 years, with 14 of those spent in Northampton Public Schools, including JFK Middle School, where he was an assistant principal. He became the principal of Leeds in 2013.

Canata said he will miss the Leeds staff and school community: “The personal connections I’ve made here made my decision so tough.”

But as a longtime resident of Holyoke and self-described “Holyoke guy,” he said he hopes to make an impact there. Many students leave the Holyoke Public Schools district for charter schools or school choice, he said. “If people don’t have a connection to their public school, to their neighborhood, I don’t see a place like Holyoke flourishing like it probably should be,” he said.