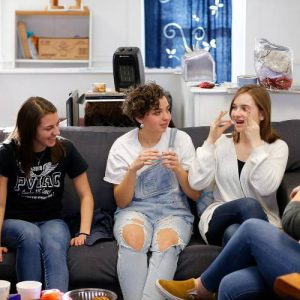 RANGE — It was a chilly March day, and four Mahar students got together after school to do what many friends would — share snacks, chat about their lives and unwind after a long day.

A local boy — boyfriend maybe? — bought one of their younger sisters some ice cream; math class has been particularly grueling; there’s a play coming up they want to attend — ordinary topics for four high school friends.

Except they weren’t actually speaking, at least not with their mouths. The girls, ages 14 to 16, were talking entirely using American Sign Language. None of them are deaf, but their tutor, who sat across from them, is.

Ralph C. Mahar Regional School students Cadence Spencer, 14, Kaitlyn Murray, 15, Gracie Marsh, 16, and Abby Henne, 15, have all taken classes in American Sign Language in school. Recently, however, they’ve been stepping up to the challenge of practicing with a “native speaker,” Jillian Roche. The informal club had its second meeting after school on Friday, where they used the language to converse, ask Roche questions and answer Roche’s questions.

“This is my second time meeting with Jillian and I’ve already learned more than I ever would have,” said Henne, who has taken American Sign Language Level 3 in school.

Kirsten Spencer learned sign language at age 13, and is a longtime friend of Roche. Growing up in Athol, Kirsten Spencer’s mother ran a daycare at their home. When Roche enrolled at age 4, the family began learning sign language in order to communicate with the young girl.

Inspired by her friend and the language they used to communicate, Kirsten Spencer went on to get her degree in sign language interpretation, and interpreted for the deaf at hospitals, schools and businesses for 25 years. She taught Cadence, as well as Cadence’s older brother, Elias, to sign from a young age.

“I wanted this (club) to happen. It’s been my dream for so long,” Kirsten Spencer said.