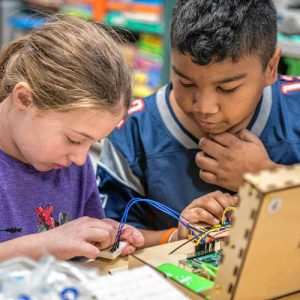 NORTHAMPTON — On Friday morning, R.K. Finn Ryan Road School third-grade students were playing Minecraft on small computers. But they weren’t using an average laptop — they were computers the students had built themselves.

As part of a new technology education initiative in Northampton elementary schools, third-graders are building simple computers in small groups and then playing a game on them to better understand how they work.

Students used kits to create Piper computers, a small device meant to teach young people about electronics and engineering. The screen is slightly larger than an iPhone and it’s housed inside a wooden box with a chip connected to a small mouse, speakers and various buttons with colorful wires.

It took about five hours to build the computers, and students then spend time playing a version of Minecraft on the computers to understand buttons and circuits, said Roxanne Mariani-Prall, a technology integration specialist for R.K. Finn and Leeds Elementary School.

Building the computer was challenging at first, said student Belle Braidman. Then it clicked for her, “I remember the first time I got it and I got it lightning fast,” said Braidman as she navigated through the cartoon world using the mouse with her computer partner, Kayden Bain-Purdy.

Then the two students had to match a circuit of wires in front of them to one on the screen. Puzzles like these help them win the game, Baidman explained as she looked through a bag of extra parts, like lights and buttons, for the one she needed.

The goal of the game: “We’re trying to stop a cheese asteroid from hitting the earth,” Braidman explained. Do the puzzles, and you save the planet from doom.