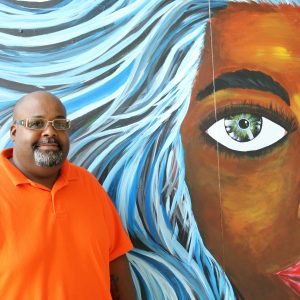 At this year’s HEC Academy graduation in June, guests were treated to a striking piece of art on the graduation program cover. Entitled Social Justice and Identity, and the culmination of a year’s work, the mural represented a project that the HEC Academy community of student artists are very proud of.

Adid Roman is the school’s Art Therapist. HEC Academy is a public day special education program in Northampton, supporting local districts and students with a small school learning environment for high school aged students with learning disabilities, and/or social, emotional, or behavioral challenges.  Roman said that the student mural was planned, envisioned and painted over the course of the 2017-2018 school year. Beginning as an idea to creatively use and fill a plain white wall as their canvas, students engaged, connected, discussed and came together to share what they felt was important to them. The mural design encouraged thoughtful discussion, new skills, and teamwork.  Those that were part of the initial planning made it theirs, and additional students climbed on board as the project moved forward.

Roman, in his first year as an Art Therapist at HEC Academy, is understandably proud of the results, but more so of the students who worked on the mural, beginning with the concept that “we are all one” – that gender and race do not matter.  “Art is an outlet,” he says, “and for students, also a way to become comfortable communicating their ideas and also their concerns.” The students wanted to be heard and shared initial ideas. Discussion about what form the mural would take took several months. Adid helped move the ideas to a formal plan for the mural. Important student input included the design for the face and the signature area.

Roman set clear expectations at the beginning of the year for student involvement on the project. Students painted in small groups, with one actually painting at a time.  Holding a brush did many things for the students – it gave them a feeling of empowerment, but they also felt calmer and more relaxed. Roman said that they were also transformed in different ways. One student, on the spectrum, brought out of his usual comfort zone by the project, soon flourished – and was quickly providing suggestions, ideas, perspectives, criticisms, and took ownership of his share of the project. He became one of Roman’s project anchors throughout the year.

Being involved in the mural work provided students with an additional outlet for learning concentration skills, and working as a team. Most students had never touched a paintbrush before but quickly developed their own styles. They responded to the art therapy in a wonderful way, becoming more comfortable with their art, but also becoming more comfortable with sharing their thoughts, feelings, emotions, and their struggles with Roman. “This is where art therapy comes to life!” said Roman.

Roman was drawing by age 3, and taking drawing classes before he turned 5. Art has always been deeply important to him.  He received a scholarship to art school by age 6, and knew art would always be part of his life. Roman received a Master’s in Art Therapy from Springfield College and joined HEC Academy in the fall of 2017. “I’m here for the long haul,” says Roman, who is already sowing the seeds for the 2018-2019 mural with a new blank canvas to be prepared for students by September.