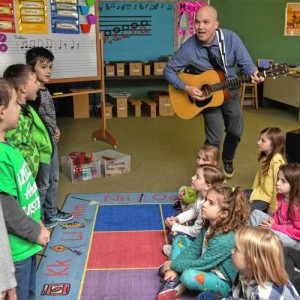 BELCHERTOWN — A new piano lab set to be installed at Swift River Elementary School will provide all students with a basic piano education by the time they finish third grade.

The collegiate level piano lab, which is planned to open at the school in February, will include 12 Yamaha Clavinova CLP-635 pianos. The pianos feature a split key functionality that allows two students to a piano, accommodating up to 24 students at a time during music class.

Geoffrey Gould, a music teacher at Swift River Elementary School, said that the investment in the piano lab is part of a push toward recognizing music lessons as a vital aspect of a well-rounded education.

“As time goes by, there was a stigma that music was just an elective, and all the data that’s been coming out over this past decade is saying that music is one of the most important, if not critical classes that students should have,” Gould said.

The entire project will cost $30,000, Gould said, with $10,000 of the funding coming from a private donation by Matthew Jackson, a class of 1996 Belchertown High School graduate and owner of Re/Max Swift River Valley real estate agency.

“We couldn’t believe it,” Gould said. “It was just an unbelievable donation.”

Gould said that he grew up with Jackson, who approached him in hopes of giving back to the community through the music program.

“(Jackson) wasn’t a musician growing up, which to me is one of the highly impressive things our music program has done for the community,” Gould said. “Even people who aren’t musicians in our community recognize the value.”

The remaining $20,000 will come from in-school and public funds, Gould said. The school is also looking to partner with different groups in town to help fund the lab.

Piano lessons will take place during students’ normal music classes, which they attend once a week for 45 minutes. Students will continue to receive both vocal and instrumental music education in these classes with the launch of the piano lab, which will be installed into a pre-existing music classroom.