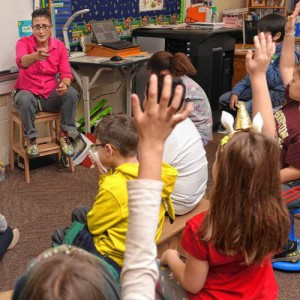 AMHERST — On Tuesday afternoon, Crocker Farm Elementary third grade teacher Lauren Mattone pointed to three photos on the board: a forest, a beach and a landscape. You just arrived here and this is what you see, she tells her students. “What do you think?” she asks the group.

As part of a social studies lesson on 16th century North America, Mattone guides the class though imagining what it would be like to arrive here 500 years ago. She stumps them when she asks how they will make a shelter, until one student suggests using a sharp rock as a tool to cut branches. Mattone gets out of her chair and gives the student a fist bump.

Mattone, who has been teaching in the district for 18 years, was recently awarded the 2018 Roger L. Wallace Excellence in Teaching Award. Criteria for the honor includes engaging teaching, instilling a passion for learning, building relationships with students and showing a commitment to social justice.

Creative lessons like the social studies one are a highlight for many of her students.

“She’s different from other teachers,” fourth-grader Elena Denno said, “because she turns things that aren’t that fun into a fun activity.” Denno was in Mattone’s class when she was in second grade, but she liked Mattone so much she sometimes comes back to help out in the classroom.

“She has this way of making each kid feel special in the classroom,” said Crocker Farm para-educator Jean Fay. “I know this because I see former students return year after year … Mattone gives up some of her own lunch and they sit with her and read.”

Fay worked in Mattone’s classroom last year and nominated her for the award. It’s given out annually to a teacher who’s worked in one of the four elementary schools in Amherst and Pelham for at least three years. Though potential honorees are nominated, a vote from staff throughout the district determines the finalist. In honor of Mattone, the award’s committee is hosting a dinner in Valentine Hall at Amherst College on Nov. 4.