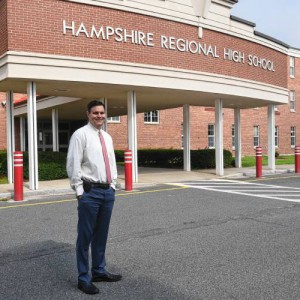 Like an orchestra conductor, Hampshire Regional School District’s new Superintendent Aaron Osborne has the task of getting all the different instruments of his ensemble to play together in concert.

To do that, Osborne said he wants to get School Committee members and town officials from the six towns in the district in open communication so that he can develop a strategic, five-year plan to help each town reach their educational goals. He plans to gather performance, assessment, budgeting and enrollment data for all schools in the district as he begins his first year.

“I’m incredibly excited about the upcoming school year and getting to know people, the towns and families,” Osborne said. “Each community is a unique entity with different management needs, goals and expectations … I want to develop our common visions for where we are going into the future.”

Osborne was named the district’s new superintendent this past spring and previously worked as business manager for Palmer public schools. He is replacing Craig Jurgensen after nine years at the helm.

Jesse McMillan is among the youngest school administrators in the state at the age of 26, but his background and experience has recently earned him the position of principal for New Hingham Elementary.