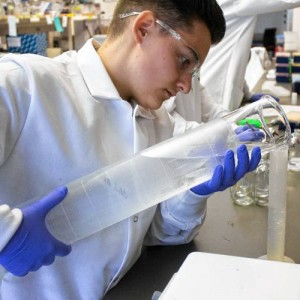 AMHERST – This summer, 30 students from high schools across Franklin and Hampshire counties are taking part in internships in local businesses and at the University of Massachusetts, where they work 30-plus hours a week. And they are being paid at every one of them.

“I’ve always advocated for students to be paid,” said Matt Rigney, alternative youth programs director at the Collaborative for Educational Services. “We have to treat them like adults if we expect them to act like adults.”

The internships are being offered through the Collaborative for Educational Services, which secured the participation of the businesses and UMass. Rigney also paired the Massachusetts Life Sciences Center with interns in the UMass jobs to assure that they would be paid.

Rigney said that the collaborative aimed to get 20 students and ended up accepting 33, although only 30 are currently participating in the program. Seventeen of the students are working out of UMass.

“UMass has been a fantastic partner in this,” he said.

The internships started in late June/early July and are set to go through the summer. Those at UMass will be paid up to $2,880.

He also said that a number of the employers have said that they will start the students at state minimum wage, as they are required by law, but that they plan on increasing those wages a few weeks into the program.

Additionally, Rigney praised Gov. Charlie Baker’s alignment of workforce and educational systems in the commonwealth, saying it’s better than any other administration he’s experienced in his work.