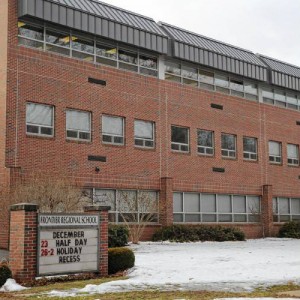 After a three-hour joint meeting between the districts at Frontier, the committees voted to proceed with an internal job posting for the position, which Modestow was nominated for in a letter to school committee members by Union #38 and Frontier Regional District administrators.

An interim principal will take Modestow’s place while he is interim superintendent.

The letter, dated May 21 and read at the meeting, included the signatures of 11 district administrators who voiced their support for making Modestow interim superintendent.

“As members of the district administrative team, we have the highest confidence in Darius Modestow, whose leadership at Frontier Regional School reflects his exceptional skills as an administrator,” stated the letter. “A consistently strong leader, Mr. Modestow has maintained the highest standards of professional excellence at Frontier Regional, honoring diverse opinions, building consensus and inspiring everyone who works in the district.”