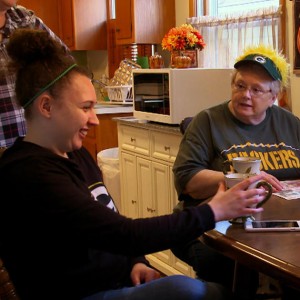 In 1850, a Catholic orphanage called St. Aemilian was founded in Milwaukee, Wisconsin to take in children whose parents had died in a cholera epidemic. 168 Years later, that same organization — now known as “SaintA” —  is still finding shelter for thousands of children who need it, often kids who have deep trauma in their young lives, and helps those kids with a revolutionary approach that’s spreading across the country.

No longer a residential orphanage, SaintA primarily places orphaned, abandoned, neglected and abused children in foster homes, and then coordinates their care. On any given day, it’s looking after some 2,000 children, almost all of whom are part of a 21st century epidemic of childhood trauma.

Alisha Fox: I got diagnosed with post-traumatic stress disorder when I was 15.

Milwaukee resident Alisha Fox was given that PTSD diagnosis seven years ago, months after she somehow found the courage to tell her grandmother – and then the police – of the terrible trauma she had been enduring.

Alisha Fox: For ten years, when I was four to 14. I’d been sexually abused and raped by my father.

Alisha’s father and mother split up even before she was born. Her dad eventually got custody because her mom had a drug problem, and he then hid his crimes from everyone for a decade.

Alisha Fox:  So during that whole time, I wasn’t a person. You know? I wasn’t anything. I wasn’t even my own property. I didn’t own myself. Somebody else did.

Oprah Winfrey: I can tell by the way you can speak about it, when you can say, “This thing happened to me from four to 14,” that now there’s been a clearing for you.

Alisha Fox: Right. Most people think that, you know, “Oh, she’s damaged,” or like, “Oh, she’s not gonna be okay,” but at the end of the day I think that I’m a survivor.

Oprah Winfrey: And every time you tell it, it makes you a little stronger.

Alisha’s survival was not a sure thing. Her father went to prison for his crimes against his daughter; she went to live with her maternal grandmother and aunt, Bonnie and Michelle Hahn.

Oprah Winfrey: What did you think the first time you heard her described as suffering from PTSD?

Bonnie Hahn: I didn’t understand it because PTSD was for the veterans coming home from the war. That was what I thought it was. I had no idea.

Tim Grove: At the time, she was acutely suicidal.

Tim Grove is clinical director at SaintA, and he took responsibility for Alisha’s care.

Tim Grove: We might not be able to ever prevent the stuff that happens to kids. But we are fully in charge of how we respond when we see it.