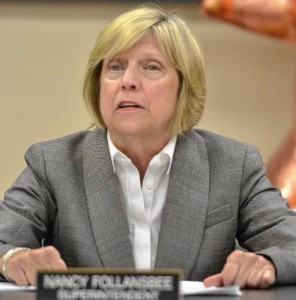 ASTHAMPTON — After 26 years working in Easthampton schools, Superintendent Nancy Follansbee will retire at the end of the school year, in June 2018.

In response to Gazette inquiries, Follansbee sent a one-sentence reply saying she would announce her retirement on Tuesday. The School Committee is set to start discussing its search for a new leader at its meeting Tuesday night.

Over the past year, Follansbee has had a full desk.

She has tackled racism and hate allegations at the city’s high school that drew a civil rights investigation by the state attorney general’s office, as well as her own investigation. She has initiated a plan to transform the school’s climate, including anti-bias training for students and teachers.

She also has worked to obtain funding for a new school. Massachusetts State Building Authority will fund about half of the construction of a new pre-K-8 school, consolidating the city’s three century-old elementary schools and the aging middle school. The project will be put before the voters next spring.

Follansbee joined the district in 1991 and over the years held various positions, including reading specialist, reading recovery teacher, literacy coordinator, Title I director and grants manager. From 2006-10, Follansbee was the district’s director of curriculum. Prior to Easthampton, Follansbee worked in New York for six years as a teacher in grades 4 through 6.

She became Easthampton’s superintendent in 2010. The original period of her current contract was July 1, 2013, to June 30, 2016. The School Committee voted in October 2015 to offer a one-year rollover. The committee voted to extend the contract for another year in June 2016, as well as increase Follansbee’s salary by 2.5 percent.

“I think that Nancy’s legacy will be a focus on curriculum and curriculum development,” School Committee member Peter Gunn said, adding that Follansbee worked to raise the district’s curriculum level.