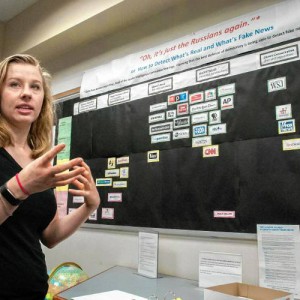 AMHERST — The pope endorsed Donald Trump, who himself is facing sealed indictments and possibly the death penalty for espionage. Barack Obama wasn’t born in the United States and some members of his Democratic Party are engaged in a human trafficking ring run out of the basement of a Washington D.C., pizza parlor.

So-called “fake news,” it seems, is everywhere, having become a zealous focus of politicians, the media and disaffected voters alike.

Misinformation and propaganda are certainly not new, though. Lies have forever been used to seize power, and often to implement brutal policies, from so-called “blood libel” tales used as the rationale for the persecution of European Jews hundreds of years ago, to politicians’ more recent justifications for war, like Saddam Hussein’s fictitious weapons of mass destruction.

But many Pioneer Valley educators say the scourge of obfuscation has, for them, justifiably taken on a new focus in the landscape of the digital age, where the internet provides endless fuel to that long-smoldering fire.