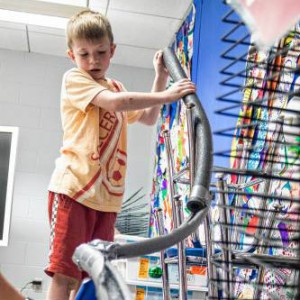 “I drop a marble down the chute, it rolls around and falls into the box because the slope of this end is greater than that end,” Magnus explained.

Since Monday, children from kindergarten through 5th grade have built Lego structures, “marble mazes,” K’nex towers, self-driving cars, and robots. Each day students received a new challenge and raw materials, watched an inspirational video about the subject, and then tackled the objective. Build a bridge, propel a car, lift an object.

“How they go about doing it is up to them,” said Donna Carmody, a 4th grade Sunderland Elementary School teacher. There’s no correct way to complete the challenges. One student put floss inside their marble track “because it’s slippery,” Carmody said. “And who’s to say it’s wrong?”

“One of the most important skills is collaboration. Nobody owns any idea,” she continued. A few students substituted their own materials to complete projects, such as a straw instead of a wooden axle. Others created a pulley system out of a cardboard box, forgoing cups given for that purpose.