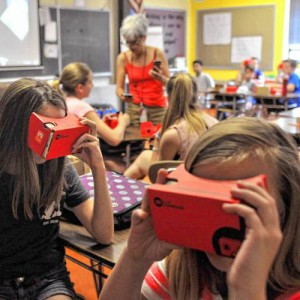 EASTHAMPTON — To guide her students as they studied ancient Greece and Rome this spring, sixth-grade teacher Judith Breier took a different approach from the traditional textbook lesson. On June 20, the class took a trip to the ancient civilizations — virtually.

“Look to your right,” Breier said to her class at White Brook Middle School. “That’s the Parthenon.”

Students gripped their cardboard virtual reality headsets — with their personal iPhones and Androids inserted inside — to their eyes. They looked up and down, and from side to side as they tried to find the temple for the Greek goddess Athena.

Chatter filled the room, with a couple of students letting out “whoas.”

And so the expedition began for the students.

Breier said she had been seeking the cardboard sets for two years, and was finally able to afford them thanks to a $250 grant from the Rotary Club of Easthampton. The 28 headsets are now available to classes and after-school programs at White Brook.

“We’re thrilled they were able to help us,” said Rachel Achmad, a parent volunteer who helped Breier seek financial support for the headsets, which give the students a glimpse of the world beyond the classroom.