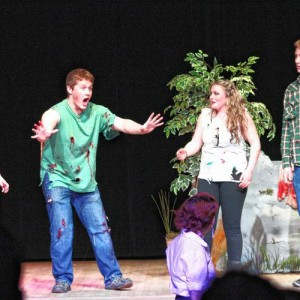 Turners Falls, MA – In a vocational school, arts are not always the focus. At Franklin County Technical School, days are already packed with traditional subjects and the student’s vocations, and beyond that, many find after school outlets in sports.

Yet, five years after it began, the small but mighty theater program at the school has found a way to make it work.

The program has provided an outlet unlike others, where students who might not normally cross paths become friends.

The program was started in 2012 by science and yearbook teacher Dan Prasol. He did theater when he was in high school at Turners Falls, and he wanted to form a group at the Tech School. So he talked to the school’s music director Dave Maloney about possibly doing a musical, but the two men were on the fence about it. They finally decided to do it.

They worked with Ja’Duke Productions and settled on “Little Shop of Horrors” as their first production.

Prasol quickly learned that musicals were not the way to go, because few kids came out for the show.

“You kind of question whether your program is going to even fly,” he said.

Many kids were worried about singing and hesitant to be involved, so the next year he decided to try a play and held auditions for Brothers Grimm, “Spectaculathon.” The difference in interest was night and day, he said.

The next year they had more than 20 kids come out, instead of the single digit numbers they had for the first play.

That settled it for Prasol.

Since that time the school has done at least one play every spring, with Prasol trying to pick modern comedies that appeal to a broad range of students, and aren’t necessarily showing at other local high schools.

Titles like “10 Ways to Survive the Zombie Apocalypse,” “Superheros: With Great Power Comes Ordinary Responsibility,” “10 Worst Break-Ups of All Time,” “That’s Not How I Remember It” and this year’s “Every U.S. Election Ever” show the group does a wide range of topics, but also tries to keep it lighthearted.