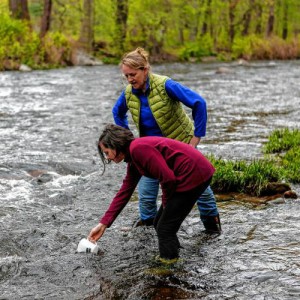 NORTHAMPTON — Seventh-graders in the community room of JFK Middle School scoot their chairs toward the front of the room as three uniformed boys appear on a large screen.

The American students wave in slow circles to their U.K. counterparts, and the uniformed boys in England mirror the gesture.

“This is how the queen waves!” one student says as the two classrooms exchange royal waves from across the Atlantic.

Then, the two classrooms break into groups to work on their projects — all pertaining to water quality.

From water production at the International Space Station to monitoring public water supplies, each team participating in the Northampton district’s new Global STEM project tackles a different aspect of water and how humans need it pure to survive.

What separates the Global STEM — which stands for science, technology, engineering and math — elective from other science courses? They’re collaborating with same-aged students in the U.K. on their projects, they had to be handpicked for the team and they had to be willing to commit to work outside of the classroom.

The district rolled out the project in September, beginning with JFK and Jackson Street School. Next year, Superintendent John Provost says, the program will expand to Ryan Road School.

“The really interesting part of this is the opportunity for collaboration, in addition to the project,” he says. “It’s preparing students for a future work environment where they may be collaborating with colleagues all over the world.”