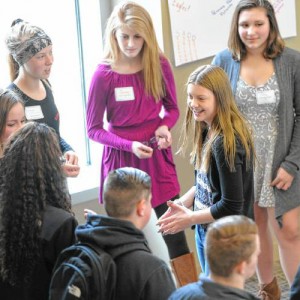 GREENFIELD, MA — Standing on a stage full of middle school students from across the region, a dozen spoke about what it means to be “STRONG” — which stands for “sports, theater, respect, original, nice and giving.”

It was an opportunity for leaders in their schools, from Greenfield Middle School to White Brook Middle School in Easthampton, to explain to their peers and teachers what makes a strong leader.

Gathering at Greenfield Community College Wednesday morning, student leaders learned about how to support a drug-free culture in their communities in a day full of activities organized by the Massachusetts Interscholastic Athletic Association (MIAA) and hosted by the Northwestern District Attorney’s Office.

“It really starts in middle (school) and what we’re trying to do is to do the early prevention,” District Attorney David E. Sullivan said. “It’s never too early to give good messages to kids.” Kids learned about how to say ‘no’ to drugs and alcohol — and what alternatives to take, like participating in sports or theater.

At the start of the event, schools presented posters about what they’re proud of in their communities. That was followed by mixing the students with peers from across the region to help them learn from each other. Many of these groups came up to the stage and spoke of the activities they do in addition to traditional learning in school, everything from track to trombone.