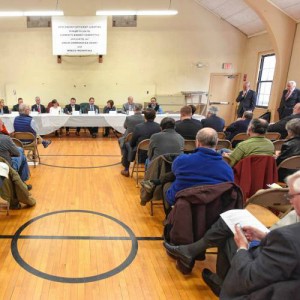 CONWAY, MA — A 14-member state Senate delegation got a blast about rural issues from nearly a dozen officials from the four western counties Tuesday.

The legislators were taking a listening tour and began their day in the Conway Town Hall.

Speakers from regional planning agencies tried to explain some of the interrelated problems rural towns face, including:

Declining populations have increased the financial burden for the remaining, aging population to pay for services and schools, and for finding replacement workers, town committee members and volunteer firefighters.

Lack of adequate transportation in sparsely populated areas and state funding formulas that penalize small towns in a variety of ways.

At the end of the day some of the Boston area legislators said they hadn’t realized the extent of difficulty small rural towns have with lack of broadband and educational expenses.