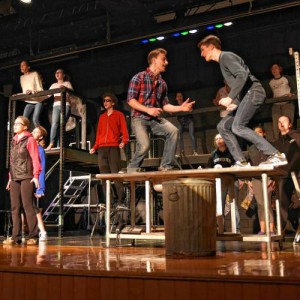 “In these dangerous times, where it seems the world is ripping apart at the seams, we can all learn how to survive … and (we) should reach out to each other and bond as a community, rather than hide from the terrors of life …” — Jonathon Larson, composer/lyricist/book writer of “Rent”

A year ago, Pioneer Valley Regional School student Annalise Holesovsky of Leverett looked at her cast mates from “Grease” and had a vision. Recently exposed to the music and storyline of “Rent,” she saw her theater friends easily slipping into the characters of this Tony Award-winning musical.

“I just thought so many of us will be seniors and this would give us a chance to really get behind the messages of ‘Rent’ in a way that we were not able to with ‘Grease.’ I felt like Pioneer was ready for it, and the students were ready for it.”

Gaining support
While the students were ready for it, some administrators needed time and feedback from the larger community to embrace the musical, because the storyline and songs feature characters’ dealing with AIDS, sexuality, drug addiction, LGBTQ issues and death in raw and realistic ways.

Michael Duprey, acting principal at the time, and then new Superintendent Ruth Miller were unsure whether it was the right time to perform a potentially controversial musical. Initially, they were reluctant to support it.

Undeterred, Holesovsky and Dominic Lewis wrote a two-page email to Miller explaining why they wanted to do the musical, and encouraged her to check out some musical clips from the Broadway production and the 2005 film.

Miller requested a meeting with Holesovsky, Lewis and Elizabeth “Bizzy” Sweeney. She shared her concerns about the relevancy of the musical to the community, and wondered whether it would allow for younger students to be involved.

Miller also was worried that this musical might not excite a large enough audience to come and see it, but the three students explained why its inherent messages of inclusivity and acceptance were important. They said that they believed students would be capable of understanding and valuing the messages in the musical and the community would be interested in seeing it.

Swayed by the students’ thoughtful presentation, and willing to explore the proposal further, Miller asked them to survey the faculty. Holesovsky, Lewis and Sweeney presented the idea to all the teachers at a faculty meeting and through an anonymously written ballot process, were met with unanimous support.

Newly hired in late spring of 2016, PVRS Principal Jean Bacon was also wholly supportive and encouraged the idea of creating an educational component to the performances so that all students would benefit.

Desiring even more confirmation of support, Miller asked that parents of students be surveyed. With Bacon’s encouragement, Holesovsky sent out a letter to the community, along with a survey to see how they felt about this production, and 87 percent responded positively.

In late fall, students were told all hurdles had been cleared and the high school version of “Rent” could be performed in the spring..

Holesovsky said she had not realized that “it would be such a huge undertaking and how long it would take to make it happen.”

The musical is infrequently performed in high schools because of the storyline and lyrics. The high school version of “Rent” is not dramatically different from the original, except that some music and an explicit scene are cut to shorten the length.