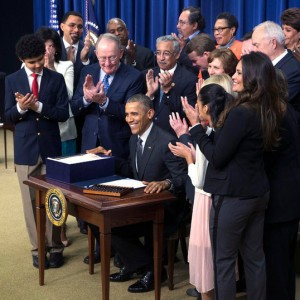 With all the attention paid to President Trump’s lightning-rod secretary of education, Betsy DeVos, and her advocacy for private school vouchers, little public notice has been paid to the action on education in Congress — where lawmakers have broader power than Ms. DeVos to make changes to the nation’s school system.

Now, Congress has done exactly that, voting to repeal crucial regulations associated with the Every Student Succeeds Act, one of President Barack Obama’s final legislative achievements.

When Mr. Obama signed the act in December 2015, many Democrats and Republicans alike celebrated the supposed end of what they saw as an era of federal overreach into local schools. The measure, known as ESSA, took a more collaborative approach than its predecessor, No Child Left Behind.

Many critics viewed No Child, passed under President George W. Bush, as well as Mr. Obama’s first-term education policies, as punitive. The policies pushed for test scores to be used to remove underperforming teachers and to shut down struggling schools. They were also unpopular because they led to an explosion in the number of tests students took each year.

Under the Every Student Succeeds Act, children still have to take standardized tests in math, reading and science, and schools still need to report on the progress of at-risk groups, like disabled students, nonwhite students and those learning English. But fewer consequences are now tied to low test scores and more emphasis is placed on holding schools accountable for providing access to advanced classes and for reducing student suspension rates. In addition, states are now able to come up with their own plans for how to intervene in failing schools.

Mr. Obama called the bill a bipartisan “Christmas miracle.” The National Council of La Raza, a Latino-rights organization, gave ESSA’s two Senate co-sponsors, Patty Murray of Washington, a Democrat, and Lamar Alexander of Tennessee, a Republican, an award for their work on behalf of students learning English. The two appeared together to accept the honor, each praising the other’s collaboration.

It took less than a year for that bipartisan consensus to fall apart.

It is customary for federal agencies to issue detailed regulations on how new laws should be put into effect, and Mr. Obama’s Department of Education did so in November. But some lawmakers from both parties saw the regulations as unusually aggressive and far-reaching, and said they could subvert ESSA’s intent of re-establishing local control over education and decreasing the emphasis on testing.

Last month, the House of Representatives overturned a broad swath of the rules using the Congressional Review Act, which allows lawmakers to spike federal regulations. The Senate passed a similar resolution on Thursday, and President Trump has indicated that he will sign it. That would leave ESSA on the books, but Ms. DeVos would have more flexibility in how to apply it.