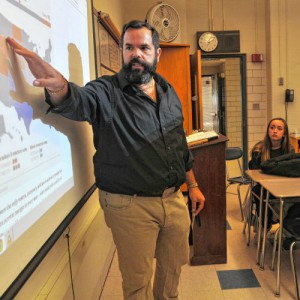 Social studies teacher Scott Mahar had the perfect election-related lesson plan sketched out for his high school students — a scavenger hunt in which they would match an issue with a candidate.

Then the second debate between Hillary Clinton and Donald Trump happened.

Instead of giving Mahar and other teachers a chance to engage students in lessons about the electoral process and where each candidate stands on important issues facing the country, the Northampton High School teacher was left trying to explain “locker room” talk, among other attention-grabbing headlines that have dominated this most unusual race for the White House.

“It’s not politics, it’s not American and it’s not funny,” Mahar said. “It’s a new election in America and it’s hard to cover.”

From contentious primaries that gave rise to Trump’s candidacy to talk about women, immigrants and a rigged election, Mahar and his colleagues are finding it challenging to keep their classrooms neutral this election season.

The social studies teacher said he’s had to change his lesson plans several times because this year’s presidential bid continues to stray so far away from real issues.

A presidential election usually gives Mahar a chance to hold issues-based scavenger hunts in which students match the candidate with the issues they represent and predict a state-by-state outcome based on issues important in each state.

This year, however, he had to redesign the hunt because so much of the debates and subsequent discussion has been about the two candidates as people and not enough on the policies they’ll push.

“The issues are kind of getting lost in the rhetoric,” he said. “This year I turned more toward what’s at stake.”

Mahar said he wanted his classroom to remain focused on substance and not devolve into controversy the way the election landscape has.

Since there seems to be so much fear around what will happen in the event of a Trump presidency or a Clinton presidency, Mahar decided instead to cover the government’s hierarchy.

The goal, he said, is to show students that our government is designed so that one leader — good or bad — can’t dismantle it, at least not alone.

“It’s one person,” Mahar said of the chosen president. “The power of our government is it’s hard to change.”

So instead of a scavenger hunt with presidential candidates, his students matched officials with their title and rank within the political hierarchy — from President Barack Obama to Northampton Mayor David Narkewicz. These elected officials represent our voice, he said.

Continue Reading at the Gazette