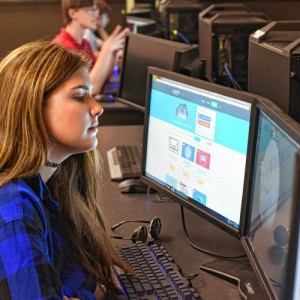 Turners Falls, MA – Students in the Franklin County Technical School’s computer programming and web design program started the school year with 26 new computers, but the students themselves were the ones who assembled the machines.

The school was able to purchase the new dual-screen computers after they were awarded a Massachusetts Skills Capital Grant for $50,777 last spring. They then received the computers later that school year and assembled them and had them ready for the start of classes in the fall.

The grant was essentially able to tackle two areas at once: the students were able to learn something additional through building the computers and the class was able to upgrade its technology.

Cyndi Bussey, one of the teachers in the program, said that they always want to stress a knowledge of computer hardware in the curriculum, but rarely get to do so in such a hands-on way.