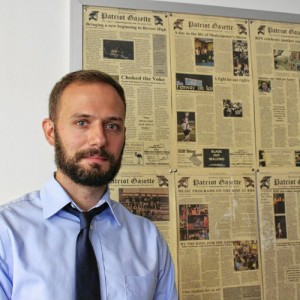 NORTHFIELD, MA — When Matthew Despres was in high school, writing for his school newspaper was how he discovered his passion for journalism. Now, as an English teacher at Pioneer Valley Regional School, he wants to ensure his students have the same opportunity.

For the first time this fall, Pioneer is offering a journalism elective that will not only teach students the fundamentals of journalism, but allow them to produce a student newspaper.

Despres, who will teach the class, proposed the idea to new Pioneer Principal Jean Bacon.

“The idea to make a push for journalism was well-received,” he said. “Principal Bacon was, right off the bat, saying ‘Journalism is important. Why don’t we have a school newspaper?’”

Though Despres said Pioneer publishes the Panther Press, a literary journal, it did not have a student newspaper. He already had experience implementing a journalism program and newspaper at Revere High School, where he worked for six years.

Despres believes having a student newspaper will provide students with a better understanding of current events in their towns and allow them to “feel like they’ve had a significant voice in creating something new” at the school.