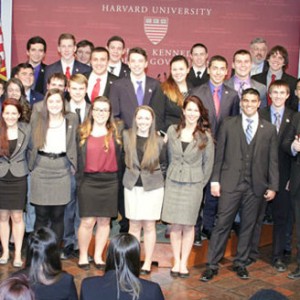 When history teacher Roger Desrosiers received a postcard from the Center for Civic Education in 1987 offering free classroom materials for the U.S. Constitution’s bicentennial, little did he know that the organization would become his life’s work. After decades of promoting the study of American history and civics, Desrosiers is now President of the Massachusetts branch of the non-profit, non-partisan foundation. The CCE operates the nationwide We the People and Project Citizen programs that promote civic participation. Their mission is to form responsible citizens who are educated in the principles of democracy.

Desrosiers emphasizes that students need to learn about the American form of government to acquire the skills that will enable them to actively contribute to society. He feels they need to understand the Founders’ vision for our political system so they can determine their own views on how the principles should be applied. “To understand democracy, students need to learn about our system of government through its historical, experiential, and philosophical underpinnings, and bring that knowledge to the present.”

To achieve that end, the MA Center for Civic Education promotes civic learning and engagement in the curriculum of primary schools through higher education, and also throughout the community. Their aim is to help people understand and navigate local, state, and national government.

Desrosiers explains that the CCE began in 1987 when it launched the We the People competition. It was funded by the National Bicentennial Commission for the U.S. Constitution, chaired by former Chief Justice Warren Burger. Since the project was launched, it has been used in over 200 Massachusetts schools.