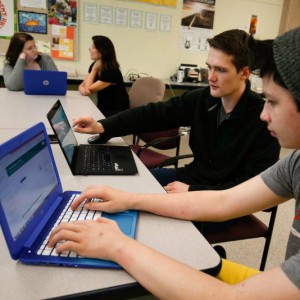 Julia Levesque was trying to give the snowman arms, typing as she looked at the image on her screen to make sure the limbs were positioned correctly. But something went wrong and the illustration’s torso shifted off to the side. She started again — this time labeling each line of numbers and symbols so she could keep track of her code.

Levesque, 17, of East Longmeadow, joined students around the world last week in an event called the Hour of Code, a program designed to make computer programming more interesting and accessible. She and her classmates at Mount Tom Academy — an alternative high school at Holyoke Community College — were among the millions of students participating this year.

Conceived by the Seattle-based nonprofit organization Code.org, the event promotes basic coding skills through simple tutorials. The event coincided with the nationwide Computer Science Education Week, which aims to highlight the importance of computing — particularly among a young audience.

At first, Levesque thought the activity would be boring and too difficult. But she was pleasantly surprised.

“Just the word ‘coding’ — that doesn’t seem like something everyone can do. It seems hard and complicated,” Levesque said. “But when you do it, you can see the rules and how it works together, so it’s easier than you think.”

She and her peers spread out around their classroom, testing a number of different online coding tutorials. Levesque picked sessions that involved drawing, as she’s interested in art. Other students chose more game-oriented activities.

Mount Tom Academy teacher Barbara Cheney, who admitted she had little background in coding herself, told her class that the point was to begin exploring the technology they use every day.

“Myth: code is mysterious and inaccessible,” said Cheney, of Northampton. “Computers are predictable, consistent and deterministic.”

Mount Tom senior Zach Laprade, 18, of Southampton, was working with Teddy McCormick, 20, an engineering student at Holyoke Community College, on an activity that involved making two-dimensional creatures chase a hero.

“It’s easier than I expected it to be,” Laprade said.

Zach’s mother, Gwen Laprade, 53, has a background in computer science and was there to assist students. In this day and age, she said, computer programming skills are becoming a necessity. Even for those who don’t work in the field, having an understanding of programming can make using software easier — an important skill given how integrated technology has become in our lives, she said.

“I’m on the computer a lot, so if I get a job doing computer stuff that could be fun,” said Adam Abely, 16, of Belchertown. Like his classmates, he said he found the online tutorials easier and more enjoyable than he had expected.