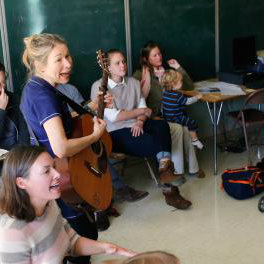 NORTHAMPTON, MA — In a city where patrons are encouraged to eat, bank and shop locally, residents are not surprised that a phrase they have been hearing more and more of is, “School Local.”

School Local Northampton is a campaign started by parents to encourage city families to send their children to the Northampton Public Schools. Organizers say it is a community effort to promote public schools in an era where other options, such as private and charter schools, are able to afford the publicity.

“The public schools, they don’t get to have big marketing budgets,” said organizer Bill Scher, of Northampton. “They don’t get to sponsor a lot of events and spread the good word about what they’re doing.”

Scher and his wife, City Councilor Gina-Louise Sciarra, have two daughters, one at Bridge Street School and one in preschool who Scher said will attend city public schools when she reaches kindergarten age.

Scher and fellow school parent Deborah Keisch began organizing meetings in the spring, and the initiative has been gaining momentum with a website, social media, and fliers around the community. Keisch said School Local is being organized and maintained through in-kind donations, with supporters giving their time and expertise.