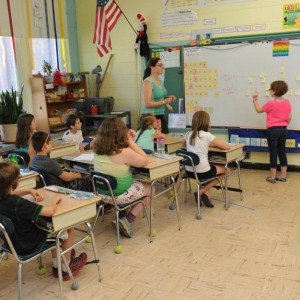 SHELBURNE FALLS, MA — In 2011, the Buckland-Shelburne Elementary School MCAS scores caused the state Department of Elementary and Secondary Education to declare BSE a “Level 3” school, which meant it was among the lowest-performing 20 percent of schools and districts.

That’s when the Mohawk Trail Regional School District sought help from a state agency known as “DSAC,” (District and School Assistance Center) and brought in a new principal, Joanne Giguere.

This year — based on the Buckland-Shelburne school’s 2014 MCAS results — BSE has exceeded all its target goals. It has become a “Level 1” school and will be used as one of four statewide Level 3 model schools, to help other school districts turn around their lowest-performing schools.

Recently, Superintendent Michael Buoniconti received a letter from the state education department, saying the Mohawk district has been chosen as one of four case studies of school districts that received help from the DSAC and made strong improvement. “Mohawk Trail is an example of a small district with a leaner infrastructure than many of the larger, urban districts the (DSAC teams) work with.”

The state has hired an independent consultant to interview BSE educators to learn which strategies have been especially valuable in improving the learning climate.