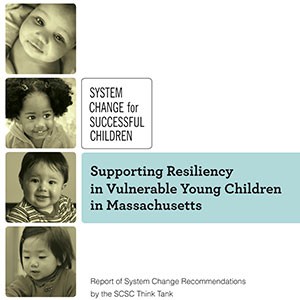 NORTHAMPTON, MA –  System Change for Successful Children (SCSC), a federally funded initiative coordinated by the Collaborative for Educational Services (CES), recently released recommendations to Massachusetts policy makers for minimizing the impact of trauma on very young children (ages 0 – 5 years) who are involved with the state’s child welfare system. The two-year SCSC project was funded through a $498,000 grant from the US Department of Health and Human Services’ Administration for Children and Families. This grant was one of only ten awarded in the country, and the only one that was not for an urban area.

The SCSC report was based on two years of innovative collaboration among early childhood mental health providers, the Department of Children and Families (DCF) and community partners, facilitated by CES. The report has been submitted to DCF and the Department of Early Education and Care (EEC), the two state agencies overseeing the education, care and well-being of vulnerable young children. The report has also been widely disseminated statewide and nationally. Some highlights of the recommendations include:

Representatives from EEC and the DCF Greenfield Area Office took an active role in developing the recommendations through the SCSC Think Tank, a coalition of western Massachusetts early childhood educators, mental health and child welfare professionals.

“The SCSC initiative gave all of us involved an opportunity to work together and unite in our commitment to making young children more resilient to the impact of trauma,” said Desiree Lalbeharie-Josias, Director of the Early Childhood Department at CES.

Over the past two years, CES piloted the intensive training specified in the recommendations to forty early childhood providers and DCF workers and supervisors in the Greenfield Area Office (covering Franklin County, Athol and most of Hampshire County).

Approximately 70% of DCF Greenfield Area Office staff took part in at least one SCSC event designed to increase understanding of early childhood development and the impact of trauma on young children.

This fall DCF incorporated the SCSC training into an early childhood training module for all new staff across the state. Though the SCSC grant is ending soon, members of the SCSC coalition will continue to collaborate at the Early Childhood Mental Health Roundtable, hosted by the DCF Greenfield Area Office.