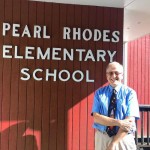 LEYDEN — Bernardston Elementary School Principal Bob Clancy is taking on a new role this year, doubling as Pearl Rhodes Elementary School’s principal in neighboring Leyden. Clancy stepped in to replace former principal Deanna Leblanc, who announced last month she accepted another job and would not return for the 2017-2018 school year. Though efforts to… [Read More]