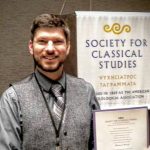 NORTHAMPTON — Northampton High School Latin teacher Thomas J. Howell recently won national recognition for his work from the Society for Classical Studies, a major academic group focused on ancient Greek and Roman languages, literatures and civilization. At the group’s annual meeting in early Janurary, Howell was given one of two awards for Excellence in… [Read More]