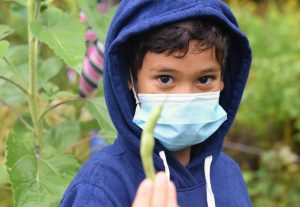 Jose Colon Martinez, 9, at the garden

José, 9, a fourth-grader at Federal Street School, and Daiangeliss Mercado, 8, a third-grader there, are among the English-as-a-second-language learners participating in teacher Karen Malley’s gardening project.

“Wait until you see the garden,” José excitedly told the reporter. “We have sunflowers and carrots and green beans and tomatoes — look at this tomato,” he said holding up a large, fully grown red one perfect for a salad or sandwich. “I wanted to have pumpkins, but that didn’t happen.”

At the top of the hill in the middle of a community garden that hasn’t been kept up well by residents this year because of the pandemic, a 12foot-by-12-foot plot is being maintained by the children and their parents. And it is thriving, providing families with fresh, nutritious food.

Malley said she received a grant from the local gardening club for the garden project earlier this year and had big plans, but the pandemic put a damper on them. She said she bought the supplies her students needed to create their small garden, but couldn’t do much more because about a month later, Greenfield schools closed for the remainder of the year.

“But the children kept this up,” she said. “They’ve been very dedicated.”

Malley said the idea was to secure a couple of grants to not only create the garden but also a curriculum around it. That’s exactly what she plans to do next spring with a second grant from the Massachusetts Association of Teachers of Speakers of Other Languages.

“This is project-based learning,” she said. “Students are not only learning about the environment and science and how things grow, but they’re expanding their language learning. They’re learning English by learning about gardening.”

Malley said the students who are involved are Puerto Rican and speak English as their second language. José pauses at times, searching for the word he wants to use to discuss his and his peers’ project, but he finds them with little difficulty and looks to Malley when he has trouble.

She and her students, with the help of Tim Wondoloski, custodian at Federal Street School, planned, planted, grew and have been harvesting the garden throughout the summer.